Last week we (Jane and I) visited her grandparents, had some tea, with some cake (we brought) and a good deal of memoirs (they spoke). It was a bit boring (Jane, you know I love them!) but the visit made me think.

Grandma showed their old photo album - a huge heavy book, with 50-years-old photos on the first page (young Grandma and Grandpa after their wedding); on the last page were the photos of Jane and me and *our* wedding. Paper photos, printed especially for them from digital originals. Hmmm... there were pictures not only on the first and the last page, hope you get it. There were several dozens of photos over the past fifty or sixty years. Several dozens! (I have 200 inside my camera RIGHT NOW).

But there were not only images. Every page had its own style, decorations, and remarks. Beside photos, there were cuts from newspapers, pasteboards, theater tickets, and even dried leaves! And I said to myself: Look, this people have only several dozens of photos, but it's their memory. You have 10Gb – but it's only 10Gb of files and folders with incredible, dumb digits instead of names.

OK, I've though, OK. It's the goddamned 21st century, fast life, fast food, fast relations, "nothing to remember", you know. All our photos are digital. So, there are things to make digital photos, things to organize digital photos, things to store them, exchange with friends, even delete those "not wanted". Ok, I thought, can't there be a way to do with those cool 4mpix photos something like grandma does with her old small b/w ones? And you know - I've found the way! (I can't call it an easy task, but a way is found, and it's the right way).

PhotoMix is hero of the hour (photomix.com says "Create digital scrapbooks or collages quickly and easily" - and this is not mere words).

PhotoMix is very small about painting; rather it is about "pretty layout". You have your "project" (it is more like Grandma's album page); you select photos, lay them out, and then decorate. Sounds simple? As simple as it must be!

Why I like doing this stuff, is that I always see "what I'm doing now", and "what I shall receive". First, I add photos to "project" and see them all on a special photos bar. Then, I create a layout with "frames" (i.e. square places, where the photos will be placed). BTW, there are preset layouts ( "compositions" ) in PhotoMix - which are also listed in a very evident list of schemes, so, something typical, ( or not-so-typical, like "huge photo in center and 5 small around" ), can be done in a click. I've found it useful even for my own, a not-so-regular layout - in one click receive something complex to play with. Because when pre-set "composition" is used, I can further change it by moving and resizing frames.

Of course, all this is done not for the sake of empty rectangles . One more click - and there is a photo in each frame. The most interesting and complex stage begins. The program itself is nothing complex, complex is the task of creating the necessary visual impression. Frankly speaking, the program really helps. It allows some basic image tweaking (like making image more/less bright to align the composition). But a really cool thing is *decorating* with borders, texts and other images.

Certainly, you won't be very surprised if I say that PhotoMix borders, backgrounds and cliparts are very vivid, grouped in pretty lists, and can be applied to one click? Then I say that . Because I *was* really surprised to see, how easy it was to do something looking just like "old rough paper, with scattered ragged-edged photos, and funny comic balloons with "thoughts" of people on photos". In fact, the most time-consuming task was to think out really funny legends - all other was done as fast as I write it in my blog!

I've been using PhotoMix extensively over the past week (with Jane's help, of course). We've already reviewed nearly 10% of all our photos. Frankly speaking, now we have only 3 ready "pages", with 5-7 photos each. But it will help you remember the real life, than 5 folders with 200 photos each. We plan to finish playing with all our today's photos next month, and I suppose it would make not more than 10-12 pages. But those would be golden pages. 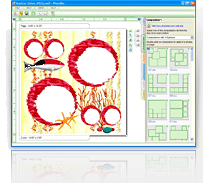